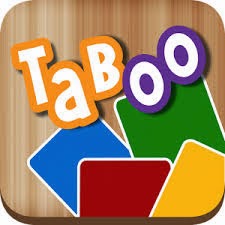 "Whenever a taboo is broken, something good happens."
Henry Miller

I simply love playing with cards and flashcards because the number of ways in which they can be used is countless. When we, as teachers, explore and create novel ways of playing with language we allow learners to live language playfully as well. This fascination with play and language led me to write a post you might have read called "Fifty affective ways to use flashcards", in which I explored how students can live language affectively and make it their own.

Today I explore the very famous taboo cards that probably many of you have already seen around, played with your friends, or maybe even have already used in class. Taboo is a card game in which players have to describe a thing without using the most common words associated with it. These words are considered them taboo and shouldn't be said.

Taboo was originally designed for native English-speaking adults and one can notice that it requires a good command of language in order to play it properly. I have in this post adapted, created, and organized a list of 30 different ways in which taboo cards can be used. Enjoy it!


1. Avoiding forbidden words: in this traditional version, the player has to describe the word in red but he/she can not say the words that are in green. As you can imagine this requires a lot of language command, which is not something most students can do. In this original version, it is important to model and brainstorm with students some strategies that can be used to convey meaning when one does not know a certain word.

2 Using all the words: in a simpler variation one player has to say all the words that are in green without saying the one in red. The other player has to guess the word on top. Guessing is very easy and the real challenge is in being able to use all the words. This scaffolding builds confidence and promotes fluency.

3. Brainstorming words: in this variation one player says the word on top and the other player has to brainstorm words until he is able to complete all the words that are in the list. If words are hard, the challenging player can give the first letter of the words that are missing. The last word is usually the hardest!

4. Delivering a  speech: in a harder variation from the previous one, the challenging player says "tell me everything you know about watches" and then the other player has to build sentences talking about the topic until he/she uses all the words in the card, which are hidden from him/her. The challenging player signals and counts as the words in the card are said by the other player. A time limit can be added to add some tension. 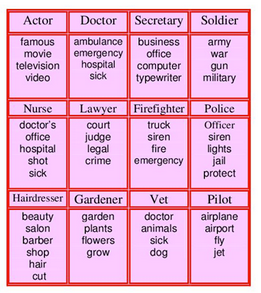 5. Leading words to be said: here the topic is given and both players form a partnership to say the words. One player gives hints in order for the other to say the word. Let's say one player wants the other to say wrist, he/she can then say "it's where you wear it" or leave a gap for the other person to complete such as "you wear your watch around your ... ". You can have a pile of cards and count the number of cards a pair or group is able to do during a pre-established amount of time.

6. Spelling words: one player reveals the topic and he starts spelling the words that are listed. The other player has to try to discover the words before they are totally spelled.

7. Drawing words: one player reveals the topic and draws the words that described in the card for the other player to guess and write these next to the drawing that was just made. In a harder variation the topic is not revealed in the beginning.

8. Acting the words: a pair creates a small sketch and another pair has to discover the words that were represented. The acting group should really emphasize the written words and gets points if the words are correctly guessed. Here again the topic can be revealed in the beginning or not.

9. Writing a poem/ rapping the words: students can write a poem or create a rap containing all the words. The topic can be the title, part of the chorus, or even not be mentioned at all!

10. Brainstorming extra words: another way to play with taboo cards is to have students in small groups collectively saying and writing all the other words that they think go together with the topic word.

11. Checking the dictionary: students use their phones to check an online dictionary and see if the words that are listed are part of the description of the word used in the dictionary.

12. Googling words: students can google the topic word and then check if all the words in the card are found in the first three search results. Another google possibility is to type the five words and see if the topic will appear in the result.


13. Creating a crossword: students can create a crossword for the their card connecting the words in a grid and creating definitions for each one of them. A booklet with all their crosswords can be photocopied and given for all students to solve.

14. Playing the multiple hangman: the objective is for the challenged player/group to guess the topic word. In order to do this they play multiple hangman with all the describing words at the same time. Once they go figuring the words then they can guess the topic. The topic is not part of hangman and can be inside an envelope. If they guess it it wrongly the game is over.

15. Guessing with one hint at a time: one player has to guess the topic being only given one hint at a time. If they risk and it's wrong they lose their card or their turn. The player that guesses the topic keeps the card. This one was inspired by an old Brazilian TV show called "Which is the song?".

16. Making a conversation: a pair creates a conversation in which words appear in the same order in the conversation exchanges. Each exchange should have only the word that is listed without any of the other ones.

17. Unscrambling words: one player gives the topic and scrambles the letters of the listed words. The other player has to unscramble and discover the words. A harder variation is to give the scrambled words without saying what the topic is.


18. Getting statistics: each student gets one card student talks to three other students one at a time and asks them to talk about the topic. While listening, this student marks down the number of times that the listed words are said. He/she does not interfere or reveal what the words are. Once the three conversations were held, this students reveals the statistics to the rest of the class. Here students can even be taught how to build an histogram like the one you see in the picture on the left.


19. Column Dictation: One player gets three cards and reveals the three topics. Then he/she dictates randomly the words that are in the three cards. The challenged player has to write them under the correct topic. Then players check the answers and discuss about the words that were hard and could fit more than one topic.

20. Interviewing the topic: one player or a group makes one question with every word that is listed. One person responds as being the topic. This is great fun as we have improbable situations where concepts, fruits, and professions speak!

21. Crossing cards: can you build sentences about a topic using the words from another card. This variation gets students to be playful and invent situations in which words can be combined.

22. Writing a pyramid composition: the top sentence has the first word, the one below the first and second words, until the last one has all the five words. The composition can be done graphically centralized in a page.

23. Choosing the best words: students are asked to rate the words given in the list and put them in a list according to how relevant they think they are to describe the topic. Other words can be suggested to be included in the list.

24. Listening the words: one player makes a short composition or deliver a speech about the topic using all the words. The other player has to read it or listen to it and try to find the words that were listed. Tell students to pay attention to how words are said.

25. Making their own taboo cards: you can have students write their own cards inside a topic you are studying. Model how they can be written to make sure they are good for playing. Once you have them made you can play with them in any of the other ways described here in this post!


Most of these activities can be done both in speaking as well as in writing. I have in all activities preferred to have students in pairs as a way of maximizing student speaking time.

To get started you can:
Making the cards with the students,
Find lots of ready made cards on the internet,
Or buy the following games which have easier language for young learners. 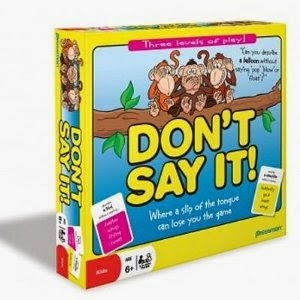 Which is your favourite activity?
Do you have any idea that is not here?
Have you ever played taboo with your students?


Send you all a big hug from Tokyo, 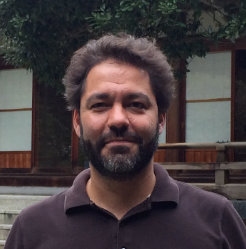