The ancient storytelling tradition of Kamishibai 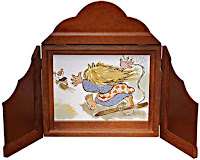 Love at first sight happened when I saw a kindergarten teacher telling a kamishibai story in Tokyo in 2009. On the next day I went to a specialized bookstore in Ginza and lost myself in their kamishibai selection. Ended buying 10 lovely stories and the marvellous box you see in the picture. Quite pricey, but really worth it!

But what is Kamishibai?

Kamishibai is a form of storytelling that originated in Japanese Buddhist temples in the 12th century, where monks used pictures to teach moral lessons to illiterate audiences. The tradition lived long and after the great depression it was revived with many unemployed men riding their special bikes, which had a stage in the back, telling stories to village children throughout Japan. Kamishibai men earned money by selling traditional candy to children. The ones who bought candy could sit in the front!


Why did I fall in love with kamishibai? 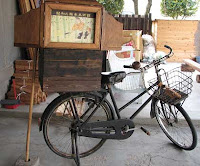 Well, many reasons! The kamishibai pictures are very expressive, colourful, and yet very simple. This simplicity allows students to imagine the scenes and enjoy the suspense created when pictures are slowly slid to reveal the next one. The kamishibai box, with its doors and flap,  isolates the big and bold pictures magically getting the students attention. Even though the stories are written in the back of the cards, students and teachers can narrate and interpret them, adding a few details of their own. Being able to engage students and to also be part of such an ancient tradition is such a treat!

Wouldn't you like to arrive at a school riding one bike like the one above? I'd love to!

Kamishibai is still a mistery and a novelty to many educators and even when I mention it to my Japanese friends, they usually tell me that it's something from a very distant past in their childhoods. The good news is that kamishibai thrived though the centuries and kamishibai stories are frequently told in schools, libraries, and community centers; not only in Japan, but also in many countries around the world. Here you can see me telling a kamishibai story to children at Paulo Schiesari Square in São Paulo, Brazil. 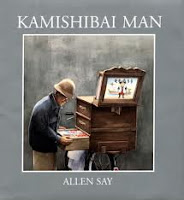 Before I tell students their first kamishibai story, I read them Kamishibai Man by Allen Say, which is a lovely story about the memories of a Kamishibai Man. I let them explore the scenery and imagine the emotions children must have felt.  I feel that giving students the background allows them to savour and keep the kamishibai experience alive!

Some students have liked it so much that they have created their own kamishibai stories and presented them to other children at school!


I have selected a short kamishibai video for you to learn even more about this fascinating art:


One problem I found with the stories that I bought in Japan was that the stories were written only in Japanese, which made me create my own stories using the pictures. I got really happy when I found out about Kamishibai for Kids, a store in New York City that makes kamishibai in both English and Japanese.

I am really excited that I am going to Japan next October and I will definitely look for Kamishibai storytellers. If you happen to know any, please let me know. I will share my kamishibai findings when I come back!
What did you like the most about kamishibai?
Had you heard about it before?
I'd love to hear from you!

Send you a big kamishibai hug,