In the beginning of this year I had the great pleasure of being back at Juan Uribe Ensino Afetivo, the language school for children that my sister and I founded in São Paulo, Brazil.

I took a suitcase full of games and you can probably imagine how excited teachers were when they saw them.  I bet students and teachers are playing them a lot now. But how do you deal when suddenly a school receives around 30 new games?

I prepared a games workshop in 3 parts: an introduction about the relation of games and language learning, exploring and playing the games, and creating best practices for games at school. Here I share what happened in this great morning with the group at school.

During the warm up I proposed teachers to remember and share the games they enjoyed playing in their childhood. I also invited them to discuss what they thought happened in their young learners' minds when they were playing games. These are some of the answers that came up: 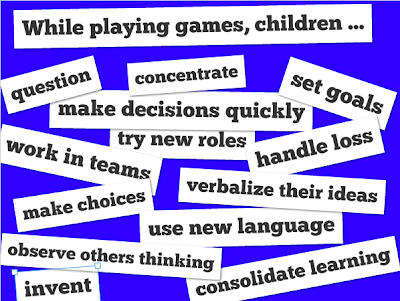 After this warm up, we talked about how we could truly explore the best of games in our classes. It was clear we could not only play without objectives just because our students loved games and that we also couldn't focus so much on language learning to a point that we removed all the fun of playing a game. The challenge was to find this sweet spot where there is engagement, learning, and fun.

Games involve learners cognitively when they have to concentrate, remember the rules, see what other players are doing, think of different scenarios and their possibilities, make decisions, and use language to express the richness of these thoughts.

Games involve students affectively when students are transported to other realities and invited to experience different roles. Young learners can become pirates, bears, farmers, and while they are playing they can help a mouse run away from a cat, explore a haunted house, or even search a ship wreck for treasure. These new realities and roles allow students to think, improvise, create, and be funny in English.

We then moved to exploring the games, the part the group had been anxiously waiting for more than a week. I divided the games in four rounds according to their types: board games, cooperative games, and card games. I asked some riddles and the groups that were able to figure these out chose the game they would play and learn about. The process itself was also fun!

Teachers read the rules and worked together to figure out each game. Some of them were quite hard and it took groups some time to get started. The best way to learn a game is with someone who knows it and has played with it a couple of times.

Tip: do not try to learn it with the students. I've tried it more than a couple of times and the time lost in getting it ready made students lose momentum.

Teachers them had a blast playing the games and even thinking about how they could be played with the students. It was beautiful to see teachers exploring the new resources at the same time they were enjoying themselves. As each group of 5 teachers played only five games, there was a natural information gap that was created for them to discover later on their own how to play the other 15 games.


Best practices for games at school

Wrapping up our morning the group emphasized that playing games during our classes is always a challenge, as we need to balance both play and language learning. The following school game rules were created at the end of our workshop:

2.     Know your objectives before playing. Make sure you have an aim for your game, as it will allow you to stay focused on language learning while playing.

3.     Explore the game before class: ask other educators, learn the rules, play it, and check any vocabulary you might need. Make sure you know and are able to explain the rules well.  Even so, take rules to class.

4.     Contextualize and relate it to the learners’ reality. Talk about what you know about the theme, creating a shared hook, before you start playing. Then comment if these situations happen in the game.

5.     Do modeling of both playing and language as it allows students to play and express themselves better. Create and write on the board structures to be used during the game. These can be said chanting or with different voices!

6.     Explore easy and hard versions of the game in different classes. Playing the game more than once with the same group is great for language learning as students are able to relive the game language.

7.     Receive contributions from students with an open heart. It’s ok if they would like to play it in a different way.

8.     Talk about the experience after playing the game. Tell students about your favorite moments as a way of modeling for them to talk about theirs.

9.     Don’t make competition a big deal. Be perceptive of children’s anxiety. The importance is in being together enjoying the moment.

10. Teach students to take care of the game with its box, content, rules and pieces. Do not return the game to the shelf if there is a missing piece. Make the missing piece or write down what is missing.


And that was our productive and fun morning playing and learning about games in affective language learning. A morning to remember and share!


I'd love to hear from you!
Do you find it sometimes hard to balance playing and language learning?
How do you include games in your classes? Which are your favorite ones?


Send you a big frug!  (Check here what a frug is in case you do not know.) 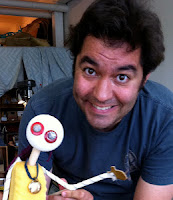