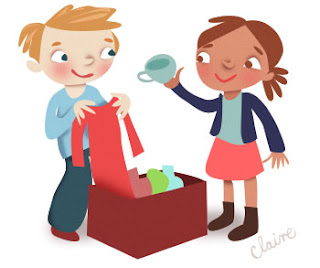 I have the pleasure to share here the functions that play might have for children. Well, not only children. I myself sometimes engage in some of these.

Devised by Bob Hughes, in ‘A playworker’s Taxonomy of Play Types’

—• Symbolic Play – play which allows control, gradual exploration and increased understanding without the risk of being out of one’s depth.

—• Rough and Tumble Play – close encounter play which is less to do with fighting and more to do with touching, tickling, gauging relative strength. Discovering physical flexibility and the exhilaration of display.

—• Socio-dramatic Play – the enactment of real and potential experiences of an intense personal, social, domestic or interpersonal nature.

—• Social Play – play during which the rules and criteria for social engagement and interaction can be revealed, explored and amended.

—• Creative Play – play which allows a new response, the transformation of information, awareness of new connections, with an element of surprise.

—• Dramatic Play – play which dramatizes events in which the child is not a direct participator.

—• Deep Play – play which allows the child to encounter risky or even potentially life threatening experiences, to develop survival skills and conquer fear.

—• Fantasy Play – play which rearranges the world in the child’s way, a way which is unlikely to occur.

—• Imaginative Play – play where the conventional rules, which govern the physical world, do not apply.

—• Locomotor Play – movement in any or every direction for its own sake.

—• Mastery Play – control of the physical and affective ingredients of the environments.

—• Role Play – play exploring ways of being, although not normally of an intense personal, social, domestic or interpersonal nature.