Interjections are quick expression of the way we feel! 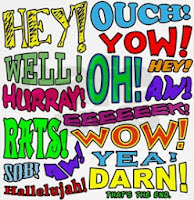 I hope you are fine and that in this new year of 2014 you experience lots of laughter, learning, love, and life. Paying special attention to the details of our lives is what will make these happen!

And talking about details, today I am inviting you to come with me to the fantastic world of interjections, these words that encapsulate so much meaning in such an affective way. You can usually say it all by just saying these powerful single words! Wow!

My interest in interjections while learning English with young learners was sparked many years ago while observing the class of a great teacher at school who was with a 6-year old. The class went fine and one thing that really called my attention was that the teacher was using Portuguese interjections instead of the English ones. Five minutes later the student started repeating the Brazilian Portuguese interjections. Ouch!

Then it was clear to me that interjections should be explicitly present in language courses for young learners and that their importance should be present in both pre-service and in-service teacher development.

Here I have adapted a list of the most common interjections that are used in a class with young learners:

Bah is used to show that you don't care about something.
Bingo is when you understand how something works. Of course, we used it when playing Bingo!
Blah communicates boredom or disappointment.
Boo is an exclamation to provoke fright.
Boo-hoo is imitative of crying and is derisive.
Bravo is a way of congratulating somebody for a feat.
Damn is used to show anger towards something or somebody.
Doh is used when something is silly.
Drat is used when you are angry.
Eek indicates an unpleasant surprise.
Eh in a question is a request for confirmation of what was just said; otherwise it is dismissive.
Er  plays for time.
Gosh is used to show surprise. It is another way to saying God.
Ha expresses joy or surprise, or perhaps triumph.
Ha-ha  communicates laughter or derision.
Hallelujah is said when something that you have expected for a long time happens.
Hee-hee is a mischievous laugh
Hey can express surprise or exultation, or can be used to request repetition or call for attention.
Hm suggests curiosity, confusion, consternation, or skepticism.
Ho-ho can indicate triumph of discovery.
Ho-hum signals indifference or boredom.
Huh is a sign of disbelief, confusion, or surprise, or, in a question, it is a request for repetition.
Hup, from the sound-off a military cadence chant, signals beginning an exerting task.
Hurrah (hoorah, hooray, and hurray) is an exclamation of triumph or happiness.
Ick signals disgust.
Kaboom is used to describe a crash.
Mm-hmm is an affirmative or corroborating response.
Mmm, extended as needed, conveys palatable or palpable pleasure.
Mwah is suggestive of a kiss, often implying unctuous or exaggerated affection.
Oh is  to indicate comprehension or acknowledgment (or, with a question mark, a request for verification), to preface direct address (“Oh, sir!”), as a sign of approximation or example (“Oh, about three days”), or to express emotion or serves as a response to a pain or pleasure.
Oh-oh is a warning response to something that will have negative repercussions.
Okidoki is a lovely way to say that something is right. (I love saying it!)
Olé, with an accent mark over the e, is a vocal flourish to celebrate a deft or adroit maneuver.
Ooh conveys interest or admiration, or, alternatively, disdain.
Ooh-la-la is a response to an attempt to impress or gently mocks pretension or finery.
Oops (oopsie, oopsy or whoops) calls attention to an error or fault.
Ouch signals pain or is a response to a harsh word or action.
Pff, extended as needed, expresses disappointment, disdain, or annoyance.
Phew communicates disgust, fatigue, or relief.
Poof is imitative of a sudden disappearance, as if by magic.
Psst calls for quiet.
Shazam is used to describe a magic act.
Shh (extended as necessary) is an imperative for silence.
Shoot is used when sometimes goes wrong. It's a polite way of sh*t.
Ugh is an exclamation of disgust.
Uh is an expression of skepticism or a delaying tactic.
Uh-huh indicates affirmation or agreement.
Uh-oh signals concern or dismay.
Uh-uh is the sound of negation or refusal.
Um is a placeholder for a pause but also denotes skepticism.
Whee is an exclamation of excitement or delight.
Whew is a variant of phew but can also express amazement.
Whoa is a call to halt or an exclamation of surprise or relief.
Whoosh is used when something is taken by the wind or water.
Woo and woo-hoo  indicate excitement. ( For Vicky Loras, who loves shouting woo-hoo!)
Wow expresses surprise.
Yahoo (yee-haw, or yippee) also indicate excitement
Yay is a congratulatory exclamation.
Yikes is an expression of fear or concern, often used facetiously.
Yoo-hoo attracts attention.
Yow is an exclamation of surprise or conveys being impressed.
Yuck  signals disgust.
Yum, or yummy, is a response to the taste of something delicious.

But no post about interjections is complete without these great youtube videos.
Here I share a fun video that not only presents great interjections, but also gives them their importance! As the song says it all: Interjections, quick expression of the way we feel!


This great video uses the song of a classic song by Schoolhouse Rock with Star Wars images. Congratulations to the person that did it! Bravo!

Hooray! This post is almost done!
Which is your favourite interjection?
How often do you use them in your classes with your young learners? 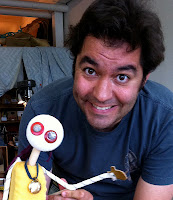 The original list of interjections by Mark Nichol is here.
Posted by Juan Uribe at 4:43 pm