Storytelling and Puppeteering at Hanazono kindergarten! 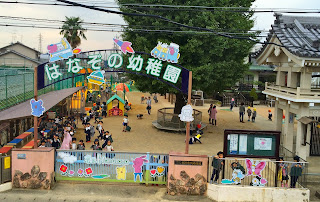 Being an English Teacher, Storyteller, and a Puppeteer, I have told more stories than I am able to imagine. But telling stories at Hanazono kindergarten was really something to remember because of the audience, the environment, and the recognition I got. A truly remarkable experience!

I probably got you curious, didn't I? Well, let me tell you how everything started. While taking the CELTA at EC Languages in April of 2012, I mentioned to my instructor David Nield that I was going to Japan to give workshops to teachers of young learners. As he had seen me with my puppet Buddy the Frog, he looked at me and said: Juan, you should have a show, because then you can present your show even more frequently than giving workshops for teachers.  I went home with that idea on my mind. Yes! I should definitely have a show of mine!

I prepared a page here on the blog with 5  different show possibilities and waited to see if anyone in Japan would be interested. And it was with great pleasure that I received Mark Kulek’s message telling me that he would be interested in hiring me for two shows and some consultancy. Wow!

In my mind I thought I would be presenting to 30-40 children at a time, probably many times throughout the morning. That was my experience telling stories at kindergartens. It was only some weeks before the actual show that Mark mentioned there would be 300 children in each presentation!

Hanazono Kindergarten is a large kindergarten in the prefecture of Gifu in Japan. It has two large schools in two different parts of the city. The schools are very organized and the students' art projects are simply amazing. When I arrived at both schools I was invited to go to the director’s office for some tea. That lasted ten minutes and then I was ready for the show. Before we had some time to interact with the children in the large playground they have. Children were very open and confident, coming and greeting with lots of “Hello” and “What’s your name?”. I felt very welcome by everybody and everybody knew I was coming.

Coming to the large hall, I did some terrain recognition and I arranged a table, the kamishibai box, and tested the wireless microphone. Everything was set!

Children arrived in a very organized way and sat in rows according to their grades. They were incredibly behaved. I could see in their eyes that they were excited about what was about to happen. I had fun making contact with their eyes and waving at them in the crowd that was suddenly forming in the large hall.

My introduction was a beautiful one. Every grade was called and Children replied. I can say it by the tone and how I was presented. Even though I can not understand Japanese very well, I was able to understand that I had flown from Brazil to be with them. I also liked my new identity: Juan Uribe Sensei!

My performance consisted of a mix of kamishibai stories and puppeteering sketches with Buddy the Frog. The show lasted 30 minutes as I had children between 3 and 5 years old as my audience. But do not think that it was an easy task, being in front of more than 300 children requires very precise actions to be able to get and maintain their attention. By the end of the 30 minutes, I could notice that some children were already drifting away.

My language had to be very precise, so that I could make sure that children would understand me. I had lots of single commands, induced language, counting until 3, and answering yes or no. I also had to be careful that children way in the back could see what I was doing. I lived my clown side by falling of chairs and giving my funniest looks. And they worked! What a feeling!

In both schools, after I had my presentation I was invited to go to the Director’s office for a treat of delicious tea and pudding. I was then given two more gifts! A laminated posters of my show in the morning and a box with a famous Japanese character. I plan to go to Japan every year and I will certainly return to visit and probably perform again to the lovely kids at Hanazono kindergartens.


Here I share a video  created with some of the very best moments at Hanazono.


On the next day I was at Gifu kids, which is just across Hanazono, and Buddy and I went to have lunch with the children. We felt like pop stars with all the kids happily waving and calling us. This was the confirmation that the show had been a success!

This fantastic experience energizes me to continue developing my skills as a performer and to become a professional entertainer, or maybe even an enterteacher. Do you know that question of what you would do if you didn’t do what you do? I always answered I would be an actor. Maybe this is my calling. And the best thing is that I can continue being an educator.

What about you?
What is the biggest audience you have talked to?
Do you have a latent actor/actress inside of you?

Send you a big frog-hug, 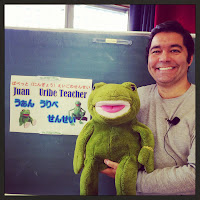