A passion ( or maybe an obsession) for frogs 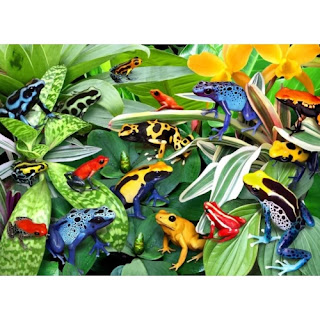 I have collected frogs for more than 10 years. My collection has more than 200 frogs and toads of all imaginable textures, types, sizes, and prices that were proudly acquired in this last decade. It got to a point that my wife lets me get only one frog every time we travel, although I usually get a couple. The very funny thing is that I suddenly started collecting frogs without really knowing why I was doing it. I just liked them and never bothered to think why I was doing it. 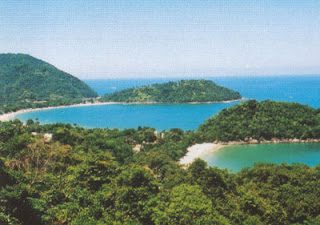 Until one day: Shazam! I remembered that as a child I used to spend long rainy summers with my family on the beach of Ubatuba, on the coast of Brazil.  There I lived a ritual that marked me deeply: at night whenever my dad drove, he would turn off the car and its lights on this dark muddy road, and my dad, mom, sister Sosô, and I  would stay in silence listening to a beautiful symphony of frogs and toads.  I have no idea how long we were there, probably ten minutes every time, but these were truly magic moments for me as a child.

Now I can say that I was involved in contemplation at a young age, developing an early sense of curiosity, awe, and reverence for nature. 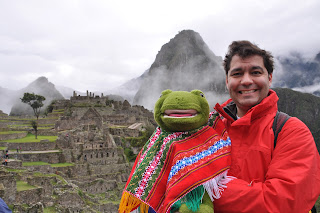 Buddy is definitely the puppet I like the most. I have taken him to many, many classes with students and he has played games, read books, and lived several adventures with the kids and me.

After my wedding, to the despair of my wife Analu, Buddy started travelling with me, with us, and I, we started making short movies with him to show children interesting places around the world.
You can see some of his adventures here. 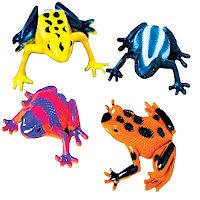 Then it was not by chance, that I started a tradition of giving one frog to every new student that joins the school and also at the beginning of every semester wishing students a great time at school. When I give it to students, I tell them about my froggy magic moments and I explain that frogs symbolize friendship, transformation, curiosity, family, and awe.

I did not see it coming, but after a while students started giving me frogs too, which has made me very happy! 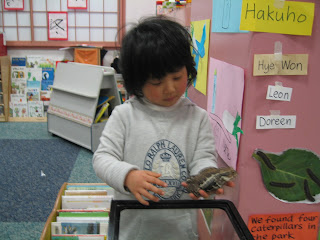 In 2009 I went to Japan with the mission of visiting six different language schools in order to see how English was learned on the other side of the planet. To my surprise in the very first school I visited in Tokyo, the kindergarten class had a real frog as their class pet. I could not believe my eyes, specially when feeding it with three crickets was part of their routine.  Students liked the frog a lot and they were taught to moist their hands before holding it. In contrast, most students in Brazil would see the frog as very icky! 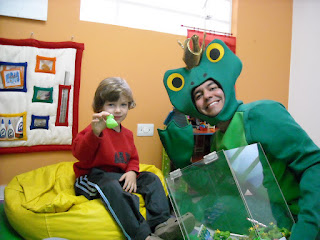 Well, as you can see this frog story goes on...
Some years ago I bought myself a frog costume, which I use in special occasions at school, such as the flea market, beginning or end of the semester.

I have it here with me in Canada and I am looking forward to using it again. Better not ask my wife what she thinks about it... 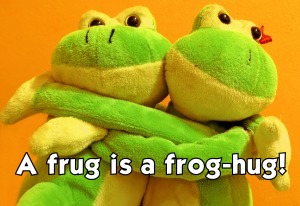 As you can see, this frog condition of mine has become more serious recently as I have started creating words with frogs to use with the students, their parents, everybody at school, and my internet friends.
The first one was frug, which is a frog-hug.
Then there was friss, which is a frog-kiss.
And I will tell you a secret, if you promise not to tell.
Inside the word friend, there is a frog!

Tell me if this is a passion or an obsession.